The Largest Fish in the Sea: Expeditions of Discovery and How We Have the Power to Change Our World
By: Autumn Homer, Shark Team One 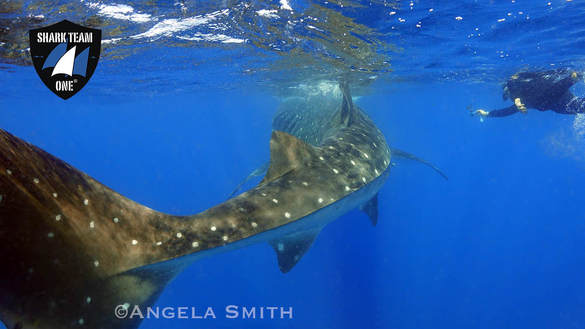 ​The largest fish in the sea can reach up to 40 feet or more in length, and weigh about 20.6 tons. Relative to the size of a school bus, it is hard to imagine these creatures would be born only about 16 inches long. Although, not much is known about them when they are this size, or even when they are adults, numerous questions about whale sharks could pile up to reach the size of the whale sharks themselves. Research groups like Shark Team One, strive to learn more about these creatures. The solving of these mysteries has the potential to save the species. If we understand more about them, we can better understand what needs to be protected and why.

Current research shows that whale sharks are ovoviviparous, meaning they produce eggs, but the eggs hatch inside of the mother instead of in the water.
The females, then give birth to live
​young. It is assumed that pregnant females go on long migrations to the middle of the ocean, or remote islands for this to occur. A baby whale shark is a rare sight, and very little is known about their lives growing up. Where they go from the time they are very young, to adulthood remains a mystery.

This is why Shark Team One’s last expedition was so unique. The team saw multiple sightings of juvenile whale sharks. In the shallow waters of Isla Contoy, they spotted a shark that was around five feet long, and they saw multiple sharks around 12 to 15 feet long in the deeper blue water of the marine sanctuary area. Local conservationists who have been watching the populations in that region for years agreed that it was very unusual to see that many very young sharks.

​Whale sharks are currently vulnerable to extinction. According to the IUCN, the Indo-Pacific population of whale shark is thought to have reduced 63% over the past 75 years. The Atlantic population is thought to have been reduced more than 30%.  This species has been on the IUCN Red List of endangered species since 2000 due to several factors working against them. From habitat destruction caused by pollution, climate change, oil and gas developments and spills, the oceans they inhabit are no longer the same as they once were. These factors may have an impact on multiple aspects of these sharks' lives. For example, their migration patterns may change if the water temperatures no longer remain the same, or if food is no longer available in toxic environments such as oil spill sites, or dead zones.

Another threat against these animals is being a product of bycatch. Commonly caught in large fishing nets, these sharks along with multiple other species of sharks, rays, dolphins and sea turtles end up dying in a fisherman’s pursuit of catching a large quantity of fish at one time. And while some whale sharks are caught by accident, in some parts of the world they are intentionally caught and illegally traded. Their meat, fins, and oil are in high demand in some Asian countries leaving these animals highly vulnerable to extinction.

During the months of May through September, over 800 whale sharks can congregate in one area to feed on the plankton saturated hot spots off the Yucatan Peninsula. It is during these prime feeding months that scientists and researchers have the best opportunities to learn more about these gentle giants.

Sightings of whale sharks like "Rooster" give researchers a better understanding of challenges sharks in the wild may face. On one of Shark Team One’s August expeditions, Rooster was spotted several times. His name comes from the bird like appearance of his dorsal fin which is suspected to have been hit by a large cargo ship's boat propeller. Sadly, this is becoming a more common occurrence, due to out dated shipping lanes and marine reserves that aren’t quite large enough.

Angela Smith, founder of Shark Team One states, “Much of the Afuera zone and the whale shark feeding area is outside the Whale Shark Biosphere Reserve. The reserve was created in 2009, but its boundaries have not been amended to keep up with where the whale sharks have been aggregating for many years since its creation. Some of the busiest shipping lanes in the Caribbean run very close to the Yucatan Peninsula. Vessels can come near the whale sharks without violating the marine protected area rules”. This can create a dangerous situation for the sharks. If people want to be able to keep seeing these beautiful creatures up-close, work needs to be done to have shipping lanes moved further offshore, and marine reserves need to expand.

While whale sharks face most of their threats from human caused issues, they also have biological components that don’t exactly help them fight back.  When it comes to breeding whale sharks are a K-strategy species, meaning they are a large, long-lived species that don’t reproduce often, as well as take about 20 years to reach sexual maturity. These adaptations used to be beneficial, but in today’s world with so many sharks dying at faster rates than before, these animals' populations are unable to keep up.

While these things combined may make it seem as if there isn’t hope left for the whale shark, it is important to remember that most of those issues have the ability to change. While the whale shark may not be able to change its biological reproducing process, we can change our habits. We can do simple things such as recycle our trash, or only use eco-friendly cleaning products that won’t harm the ocean when they go down our drains.
We can get involved in local policy making where we have a say in whether our grocery stores use plastic bags, to prevent them from ending up in a shark, or any other creature’s digestive system.  We can only buy from companies who commit to running their business based on sustainable values, we can educate people around us on these issues, and we can support research projects being done to solve these problems.  The whale shark may be the biggest fish in the sea, but we have something a little better. While we might not have size, we have the power to rationalize and adapt our actions to change the world, and ocean that surrounds us.
Find Out More About Our Expeditions

The Largest Fish in the Sea: Scientific Discovery, Beauty and Perhaps a Glimpse into the Unknown
By: Autumn Homer, Shark Team One 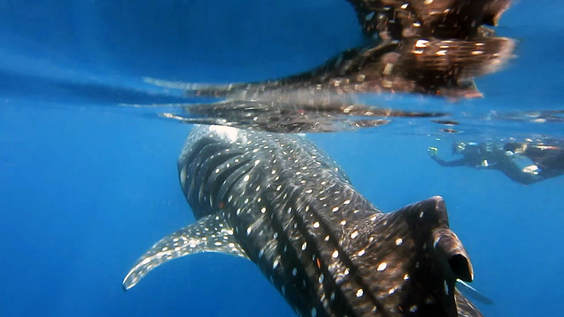 When most people think of something big, it is often associated with something scary. A big mountain can be associated with fear of heights, a big city can be paired with fear of getting lost, and a big animal is often paired with fears of people being attacked. However, the largest fish in the sea has never even hurt a human being before, or even another marine animal. This enormous animal can reach the lengths of a school bus, by only eating the smallest creatures in the ocean. This gentle giant is a whale shark.

Whale sharks are found in all tropical seas. Scientists believe by spending their time in warmer surface waters, they can conserve energy that would otherwise be used to stay warm.  This tactic, along with their ability to be negatively buoyant (meaning they can sink to the bottom of the ocean to reach their food) is one of the reasons it is believed they can grow so big. By conserving its energy and warmth, the whale shark can forage for food for longer durations of time, thus allowing it the fuel to grow.

Another way they stay warm is their organs are surrounded by huge masses of white muscle. The bigger the amount of muscle, the longer the whale can stay insulated for. Scientists believe this is one of the reasons why these sharks have evolved to grow so big.

Whale sharks have existed for millions of years, dating back to the Jurassic period. While the scientific method is now the key way in discovering why things are the way they are, people used to fill in the gaping questions of the world with stories. The tribes of Mozambique share a story where one of the gods was visiting earth and saw
​a whale shark swimming under his boat. Mesmerized by its grace and beauty, he showered the fish with silver coins which turned into spots all over its body.

While this tale is fun to hear, scientists know the real reason behind the spots. These white spots and stripes against their dark blue/gray skin allow the animal to camouflage. The spots and stripes reflect and disperse light, this makes it harder for them to be seen by predators. Like most pelagic fish, whale sharks have countershading. This is when their bellies are lighter and tops are darker. This allows them to blend in to the ocean, no matter which angle they are being seen from. When a predator is looking up at a whale shark the white bellies blend in with the lighter water, and if a predator is looking down at the animal its dark back blends in with the depths of the ocean.

​While they may blend in well with their surroundings all whale sharks are unique. Just like a human fingerprint, each shark has an area just behind their gill slits where their markings are completely different. These different markings are being tracked by scientists, and Shark Team One is working on being able to identify and research specific animals on their annual migration off the Yucatan Peninsula. They have a software app developed by FastField by Merge Mobile which is helping them capture ecology information about the sharks. Software such as this allows scientists to learn about the species by capturing data to better track whale shark movement patterns, global population structure and size. After all, very little is known about the species and in recent years scientists have noticed a decline in numbers of wild populations.

​More research must be done to protect the oceans gentle giant. After all, big doesn’t have to mean scary. A big mountain can also lead to beautiful views, a big city can provide ample opportunities and a big animal can play an important role in an even bigger ocean ecosyste​m, and provide humans with scientific discovery, beauty, and give us a glimpse into the unknown. 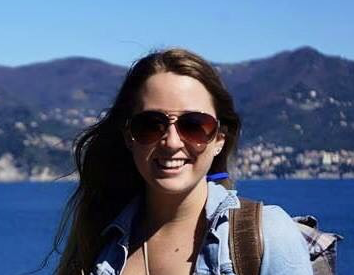 ​About the author: Autumn Homer is a recent graduate from Stetson University, where she majored in Environmental Studies and Communications with a minor in psychology. She has always had a passion for animals and you can find her volunteering at one rescue organization or another. She currently works at Clearwater Marine Aquarium and spends her spare time reading, writing, or out on the water. Autumn volunteers for Shark Team One and is one of our conservation and ecology writers!
Proudly powered by Weebly