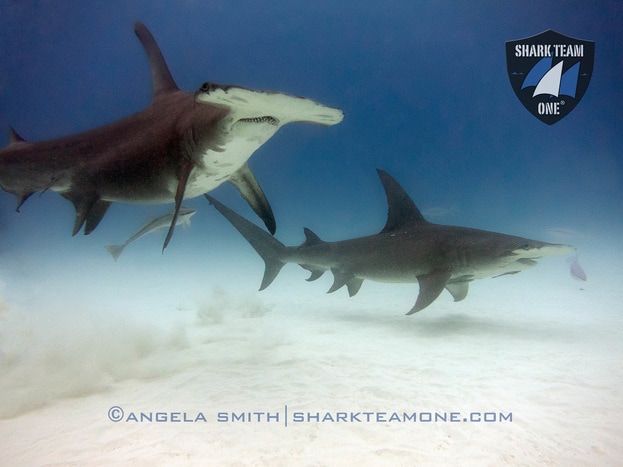 The great hammerhead shark, Sphyrna mokarran, is the largest species of hammerhead shark. These sharks have a flat hammer-shaped head with a notch at the center located along the front edge. The first dorsal fin is very high and curved; the second dorsal and pelvic fins are high with deeply concave rear margins. They are light gray or gray-brown on the dorsal side, white on the ventral side and their fins lack conspicuous markings.

This large shark has a very straight and square cephalofoil, the 'hammer head', compared to other hammerheads. Although the great hammerhead can grow up to 20 feet, such sizes are seldom observed. Most specimens grow to about 11.5 feet long and weigh over 500 pounds. The heaviest specimen was recorded at 1,280 pounds, a female caught off Florida in 2006. Their average lifespan is around 20 to 30 years. The oldest hammerhead recorded was thought to be around 40 years old!

According to the IUCN Red List of Threatened Species, great hammerheads are globally endangered.
http://www.iucnredlist.org/details/39386/0

The main reason is the quality and size of their fins which is the key ingredient in shark fin soup. The great hammerhead have what fin traders call "high thread count" fins making it very desirable for shark fin soup.
Great hammerheads are suspected of at least >50% decline over the past 10 years. The last assessments globally were done in 2000 at which time they were considered endangered. Conservationists believe that as of this writing, great hammerheads could be critically endangered in many areas globally. The hammerhead family in general have a high mortality rate and when taken as bycatch or via catch and release, they suffer greater than 90% vessel mortality.

Habitat and Biology: The great hammerhead is a coastal-pelagic and semi-oceanic tropical hammerhead occurring close inshore and well offshore, over the continental shelves, island terraces, and in passes and lagoons of coral atolls, as well as over deep water near land. This shark ranges from near the surface, in water about a meter deep to over 80 meters deep. The great hammerhead often favors continental and insular coral reefs. It apparently is nomadic and migratory, with some populations moving towards the poles and cooler waters during the summer months and returning towards the equator during the winter.
​
The great hammerhead takes a variety of prey, but seems especially to like stingrays and other batoids, groupers and sea catfishes. Its diet also includes tarpon, sardines, toadfish, porgies, grunts, jacks, boxfishes, crabs, squid and other sharks. The shark uses its head to pin down stingrays and eats the ray when the ray is weak and in shock. This species seems not to be bothered by the poisonous spines of its stingray and catfish prey, and is sometimes found with stings imbedded in its buccal cavity.
​
Additional information provided by Florida Museum of Natural History: https://www.flmnh.ufl.edu/fish/discover/species-profiles/sphyrna-mokarran 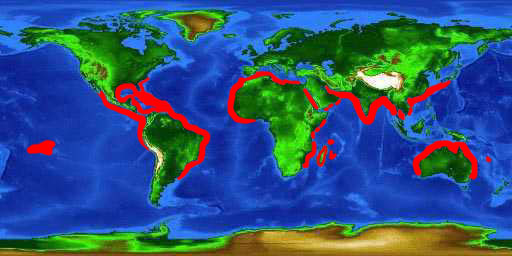