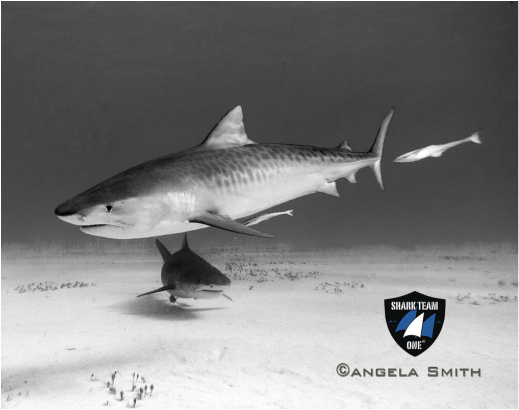 Tiger sharks are Near Threatened according to the IUCN Red List of Threatened Species.
http://www.iucnredlist.org/details/39378/0

Tiger sharks are a relatively large species of shark that live primarily in tropical and subtropical regions around the world. While the stripes do appear distinctly in younger tiger sharks, as the sharks grow and mature, the stripes actually begin to fade and become much less apparent on adults. Tiger sharks are one of the largest shark species. Born at only 20 – 30 inches long, they have been known to reach lengths of up to 16 feet as adults, with some larger specimens reported. Adult females tend to be larger than adult males.

Tiger sharks give birth to 10 to 80+ live babies: Pupping is reported in spring and early summer, April to June in the Northern Hemisphere, and probably November to January in the Southern. Size of litters very large, 10 to 82. The gestation period may be slightly over a year. In the Northern Hemisphere, mating may occur in the spring. This species may mature at between 4 to 6 years old and live to at least 12 years.

Habitat and Biology: A common, wide-ranging coastal-pelagic tropical and warm-temperate shark, with a wide tolerance for different marine habitats, on or adjacent to the continental and insular shelves at depths from the surface and intertidal to possibly 140 m. It seems to prefer turbid areas in continental waters, large island groups or high volcanic islands where high runoff of fresh water may contribute to a high density of prey organisms. It often occurs in river estuaries, close inshore off wharves and jetties in harbours, and in coral atolls and lagoons. It is also known to make excursions far offshore, in the open ocean, but is not a truely oceanic species like Prionace and certain Carcharhinus. It does occur off oceanic islands far from other islands and continental land masses, and probably is capable of long oceanic voyages between island

Tiger sharks are excellent scavengers with amazing eyesight, even in comparison with other shark species, and are known to have an extremely keen sense of smell. Those skills make them particularly effective night time predators.
​
"Most of the tiger sharks you’ll encounter at Tiger Beach are slow moving animals. There’s no mistaking their large size and tremendous power.  Divers can expect that the tiger sharks will swim right up to them and must pay close attention at all times. SCUBA diving with these sharks means keeping your head on a swivel and taking notice of where each shark is at all times.  It’s easy to get focused on the sharks that are in front of you and forget to notice the ones behind you. Seeing a tiger shark in the wild is a true once in a lifetime experience which you will cherish and never forget! " - Epic Diving 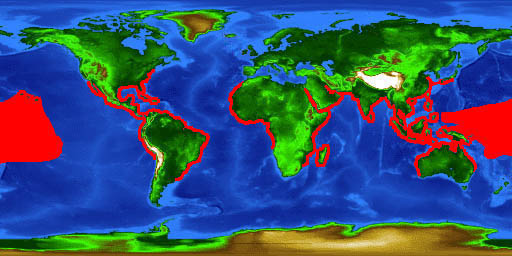