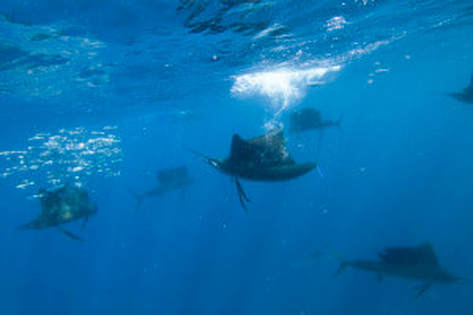 The Atlantic sailfish, Istiophorus albicans, is one of the fastest fish in the ocean and has been clocked at speeds up to 68 mph. They can grow near to 10 feet long, including their elongated bill. The sailfish has a large first dorsal fin running the length of its body. This signature fin is taller than its body in length and raises to become the "sail". While blue on top the sailfish is white below, with rows of blue dots and it can change its color based on excitement levels.

According to the IUCN Red List of Threatened Species, sailfish from the Atlantic population are caught as bycatch in the global longline tuna fishery and are accidentally caught by commercial fishermen with surface drift nets by trolling, harpooning and set netting. Sport fishing could also pose a potential threat locally in the Atlantic, especially as this species is found primarily nearshore and around islands. The greatest catch rates (non catch and release) in the world for sailfish occur in the national longline fisheries off Costa Rica.

In addition to longline fisheries, this species is also taken by purse seines and by some artisanal gears which are targeting marlin. The increasing use of anchored fish aggregating devices (FADs) by various artisanal and sport fisheries is increasing the vulnerability of these stocks as well. Many assessment model results show evidence of overfishing, and additional models are data deficient, pointing to reduced stock sizes for the Atlantic sailfish population.

The Atlantic sailfish population has a high vulnerability to extinction – 65% out of 100%.
​
Habitat and Biology:

The Atlantic sailfish mainly swims at the surface of oceanic waters. It generally remains above the thermocline, in water temperatures between 70° and 83°F. There is evidence that they also swim into deeper water. It is less oceanic than other billfishes, making frequent forays into nearshore water.

Atlantic sailfishes' habitat choices vary according to water temperature and in some cases wind conditions. At the northern and southern extremes of their distribution, Atlantic sailfish appear only during the warmer months. These seasonal changes in distribution may be linked to prey migrations.The species prefers temperatures between 21° to 28°C, but is also capable of descending into deep water. The Atlantic sailfish is highly migratory and can be found from approximately 40°N to 40°S in the western Atlantic Ocean and from 50°N to 32°S in the eastern Atlantic Ocean.

​While sailfish spend greater than 80% of time in the top ten to twenty meters of the water column, they can dive to over 100 meters! A tagged sailfish had a maximum depth recording of 464 meters. Sailfish possess specialized brain heaters and photoreceptors in the eye that are used for feeding at lower light conditions during deep dives. However change in temperature limits diving of billfish.

Sailfish typically hunt in groups to drive large fish schools to the surface for easier capture, working together similar to a wolf pack. Sailfish employ a number of maneuvers or behaviors with their bills in the role of predation.  For instance, in addition to slashing their prey, researchers are studying how sailfish may also use their bills to destabilize prey by removing it from the school, then corralling it into their mouths. Small tooth-like protrusions on the bill called denticles may be used for this purpose. Sailfish use a complex capture sequence and usually chase their prey to exhaustion, eating every last fish in a bait ball.* 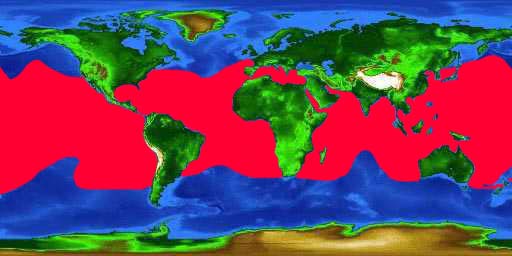