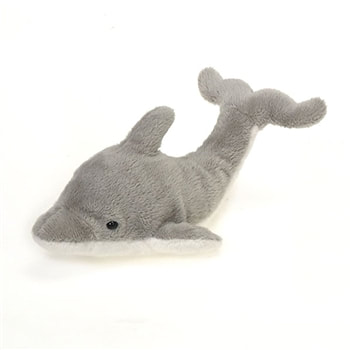 This adorable bottlenose dolphin we call "Bimini"! Huggable and very plush this dolphin will be swimming into your heart forever! Named after our founder, Angela's first encounter with a wild dolphin off the coast of Bimini, bottlenose dolphins are extremely intelligent and social animals. There are even stories of dolphins saving humans lost at sea. Bonds between humans and dolphins are very strong. If you have ever seen one or been swimming with one in the water near you, you will know that they are mystical, otherworldly creatures that look deep into your eyes as they swim by. Using echolocation dolphins can communicate with each other and we even think (unofficially) they know how you are feeling and can pick up on your mood and emotions.

When you adopt this 6" plush dolphin you will be helping fund expeditions to the Bahamas where we find dolphins swimming in giant pods and sometimes even interacting with the hammerhead sharks we are studying. Founder, Angela's very first stuffed animal was a dolphin, let's hope this adoptive animal will also inspire you to go out and save the world's oceans and endangered species!

Add to Cart
Back to All Adoptions
Proudly powered by Weebly