Selected Press About Some of Our Accomplishments:
(For Up To The Minute News Follow Us On Social Media!) 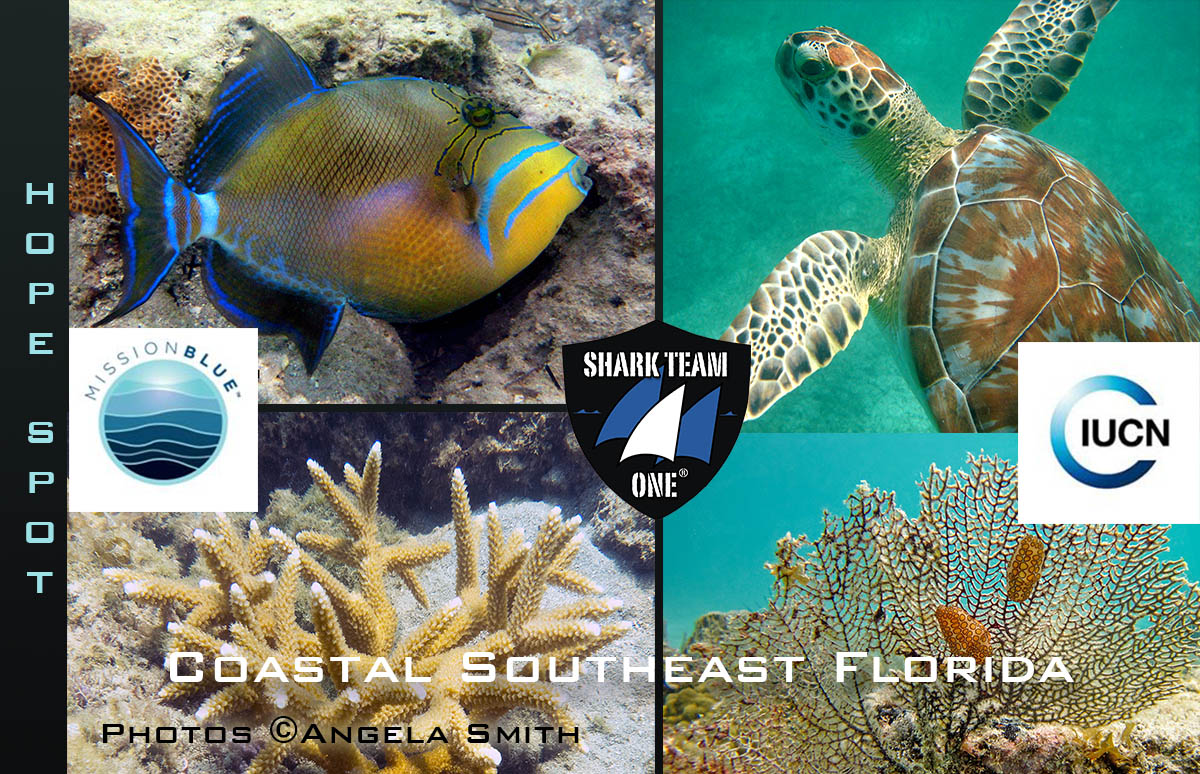 On behalf of Shark Team One and the many organizations that work toward ocean conservation in coastal Southeast Florida, I would like to thank Sylvia Earle, the team at Mission Blue and IUCN for all the work that went into this designation and for the great honor it represents!

According to Mission Blue, “Hope Spots are about recognizing, empowering and supporting individuals and communities around the world in their efforts to protect the ocean.” Hope Spots are also areas recognized by conservationists and scientists as having unique ecological attributes that make them deserving of marine protected area designation.

Coastal Southeast Florida qualifies for this designation by having characteristics such as; a high number of threatened, endangered and critically endangered species, diversity of species, pelagic species migration pathways, historical and cultural significance, presence of aggregations, spawning areas, types of reef classification, coral and fish larval recruitment pathways and connectivity to other nearby marine protected areas.

Our Hope Spot nomination underwent rigorous scientific analysis, and since our area of Coastal Southeast Florida has been chosen, it will now be in the world spotlight! Mission Blue, IUCN, other NGOs and institutions should use the designation as a beacon of hope for global leaders, policy makers, educators and other stakeholder groups.

Southeast Florida has the only living barrier coral reef in the continental United States and including the Florida Keys, it is the third largest barrier reef system in the world after the Great Barrier Reef and Belize Barrier Reef. Protecting this crucial global Hope Spot is going to be the supreme responsibility of this generation.

I am proud to have worked for a number of years providing catalyst and scientific background for this particular Hope Spot nomination in conjunction with Shark Team One’s Ocean Ecosystem Protection Program and with the inspiration of my involvement in other local action strategies in Southeast Florida such as Southeast Florida Coral Reef Initiative and Our Florida Reefs. The nomination’s shining moment is today, because all organizations and stakeholders who are working to protect coastal Southeast Florida, have now been officially recognized by Mission Blue and IUCN’s newly selected Hope Spot!

Coastal Southeast Florida is in a unique situation since millions of people live along this stretch of coastline from Dade county in the South to Martin County in the North. Residents work and play right next to this area of coral reef tract and associated habitats which do not have any marine protected status. This region sees heavy use by commercial and recreational stakeholders such as shipping, yachting, fishing and coastal construction. A delicate balance needs to be reached for such a fragile area to exist right next to the major urban centers of South Florida.

Due to this urban proximity, coastal Southeast Florida also suffers from pressures that include; sewage outfalls, storm runoff, anchor damage, beach renourishment projects, shoreline modification, port expansion projects (dredging), invasive species, pollution from fertilizer and storm runoff to name a few human stressors. So the list is long as to why this area is in dire need of protection.

And yet South Florida somehow for the moment supports a small number of endangered and critically endangered species. On a given day, conceivably you could swim by a head of staghorn coral, catch a glimpse of a great hammerhead shark on a dive and then see a green sea turtle hatchling crawl past you on the beach at night. All those species are classified as endangered or critically endangered by the IUCN and yet they are somehow existing against all odds.

So amid the human stressors there needed to be significant glimmers of light or quite literally hope spots for the coastal Southeast Florida area or it would have not made it through the nomination process.

The stars of this Hope Spot nomination are the species and ecosystems that we hope to save for future generations. But it’s the people of Southeast Florida that will make it happen. Southeast Florida is also unique in its human resources, since a large portion of the nation’s top marine scientists and conservationists live and work here. Whether they are restoring coral reefs, studying how to fight invasive lionfish, fighting against overfishing, port dredging, water quality, working to save endangered species or discovering forests of endangered corals, there is a tight-knit group of South Floridians who will not give up working to save what is left of our fragile ocean environment.

So join Mission Blue, IUCN, Shark Team One and all the organizations that have or will end up working toward this common goal to better our local environment in a resounding shout out. Start planning how you want to get involved and how you want to help us. It’s going to take an army!

Think about a living reef so close to an urban area that anyone from any walk of life can visit the reef any day of the week! Children from local schools visit the beach daily on field trips. Give those same children a mask and a snorkel and we may have just changed their life! One of them becomes a future marine biologist who works to find resilient coral for a changing ocean, another discovers a cure for cancer from a new compound that exists in coral or saves a species of shark that is on the brink of extinction. That is HOPE! The intrinsic, cultural and natural heritage value of the Southeast Florida reef tract cannot be named. The HOPE it provides could just change the world! 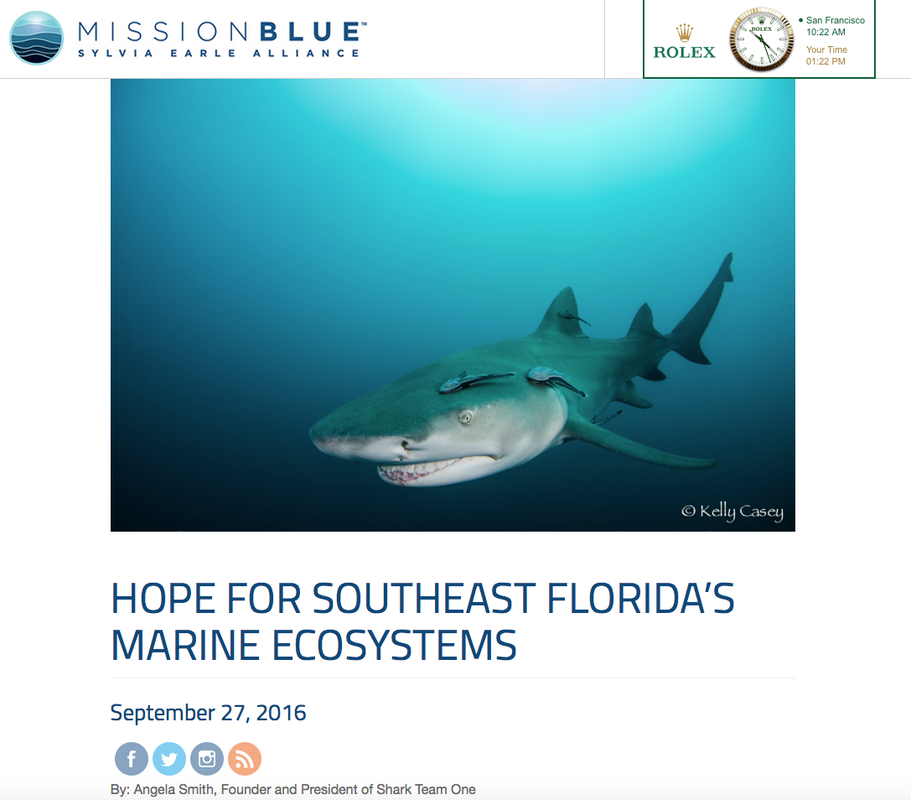 Click here to read the rest of the article:
https://www.mission-blue.org/2016/09/hope-for-southeast-floridas-marine-ecosystems 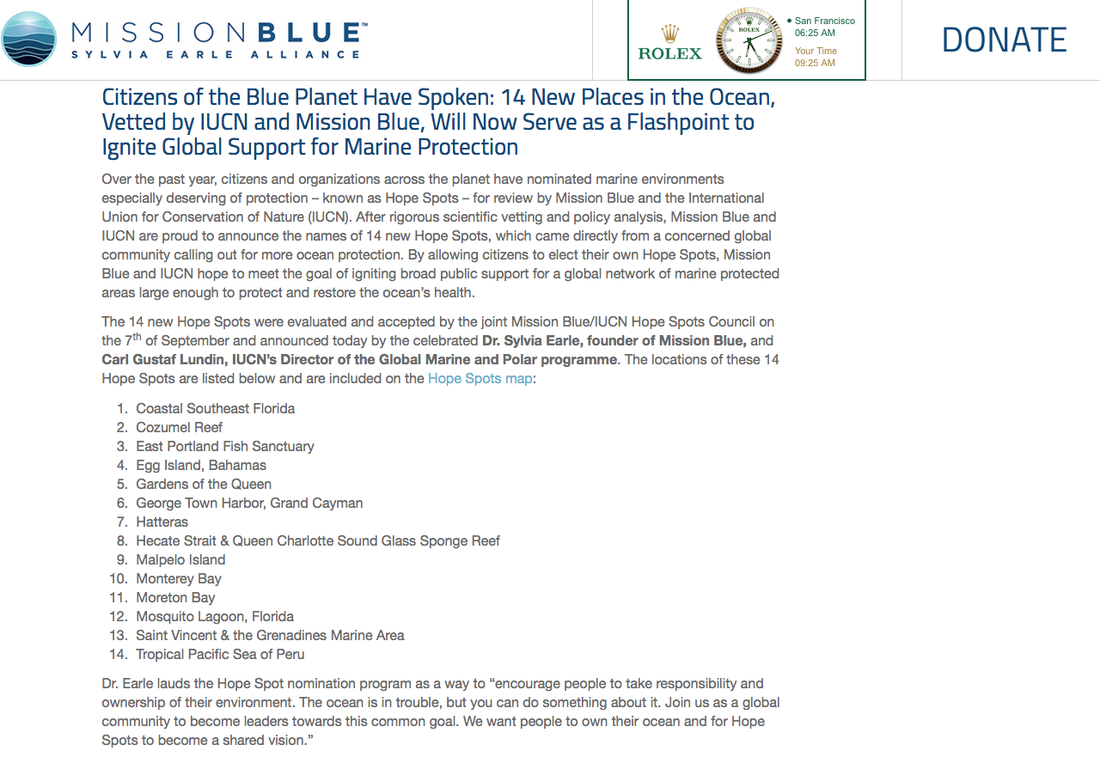 Click here to read the rest of the article:
www.mission-blue.org/2016/09/hope-spot-nominations-open-to-the-public 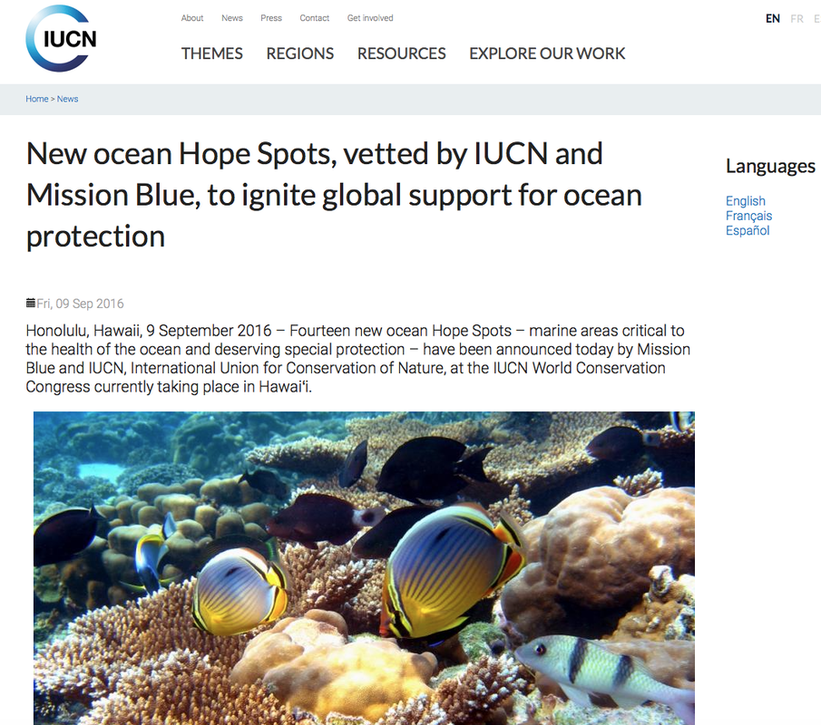 Click here to read the rest of the article:
www.iucn.org/news/new-ocean-hope-spots-vetted-iucn-and-mission-blue-ignite-global-support-ocean-protection

We couldn't be more proud to announce our new partnership with Mission Blue.

Shark Team One is honored to be part of the global coalition of passionate organizations working together to improve the health of our oceans, create a global network of Marine Protected Areas and save ‪ocean‬ environments! 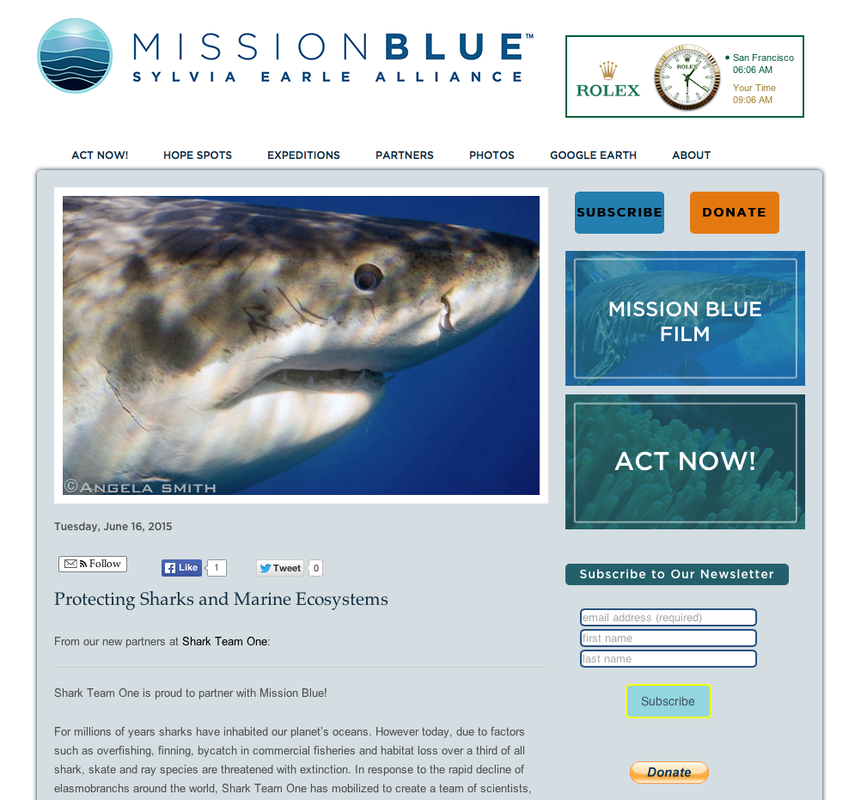 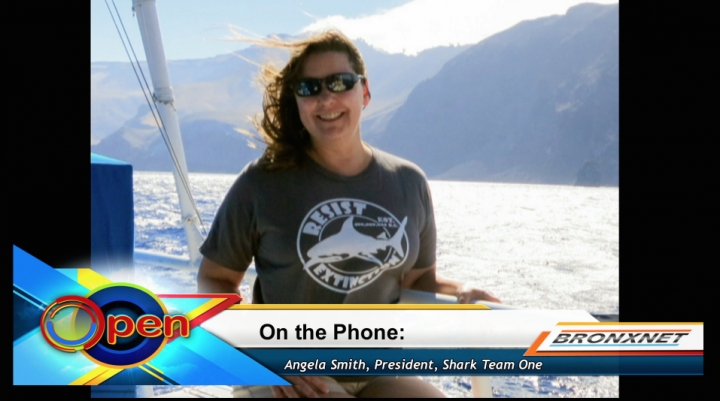 Daren Jaime host of the show OPEN on BronxNet Television interviewed Angela Smith, Shark Team One Founder today on BronxNet TV about shark conservation and the work of Shark Team One! We loved working with Producer, Shirley Arrieta!

OPEN BronxNet Television airs on BronxNet Cablevision Channel 67 or Verizon Fios Channel 33 at 10am every Monday, Wednesday and Friday.

Shark Team One Founder Angela Smith Featured as Photographer of the Month and Joins as Board of Directors for SFUPS!

Angela's online underwater photography gallery with South Florida Underwater Photography Society (SFUPS) went on view! Some of the shots showcased are from the Guadalupe Island, Mexico Expedition. She was chosen as photographer of the month and will also join their board of directors!
All ocean life depends on a delicate balance! Protecting sharks and ocean ecosystems begins with you. Your support will make a big difference for endangered sharks and ocean ecosystems in the United States and in the countries we work.
DONATE NOW
Proudly powered by Weebly